We collided with one of the glass spheres, and were plunged into a universe of, viscous, amber fluid. Dark shapes drifted passed, full of eyes and teeth. A school of fishmen approached, gurgling in our direction.

Much like the surface of this planet, the skies are filled with a vast array of diverse, alien technologies left over from a wide assortment of previous civilizations that at one time called this planet 'home'. Some are designed as weapons, some are defensive systems, and many others seem to serve no function at all.

The Glass Spheres, numerous as they are, seem to fall into this last category. They appear to float through the atmosphere with no known purpose or direction, simply drifting from place to place. They are translucent, their surface marbled with swirls of interesting colors. There doesn't appear to be any visible break in the surface; no windows or doors, and no propulsion system, either.

Things have been known to disappear in their vicinity. Things have also been witnessed emerging from the floating constructs, although neither phenomena can be explained.

The Truth: In actuality, the Glass Spheres are an interconnected network of teleportation devices, left behind by the Shuun, whose stellar empire once reached as far as this planet. Intended as a means of invasion, something from this planet instead used the Shuun Glass Network against them, completely eradicating the Shuun from existence before they could begin their invasion. The spheres function by shunting anyone and anything that comes in contact with their surface through an extra-dimensional space: a pocket universe composed entirely of an illuminated, amber-hued liquid, inside of which live various types of exotic flora and fauna. There is even an intelligent race of fishmen known as the Moorla who call this space home, and are always very confused and frightened by encounters with strange things 'passing through' their contained environment.

Those being teleported through this dimensional rift experience a sense of 'awareness', however these 'outsiders' are mostly non-corporeal while traveling, isolated from physical possessions as well as other travelers. To the native inhabitants of the pocket universe, outsiders appear as long strands of fibrous meat. Travel itself takes only a few seconds, but the process can send any user to any other glass sphere on the planet, although most travel in this fashion occurs randomly, with no means of controlling the destination point.

Magic and technology can create means to stay in the extra-dimensional space for longer periods, though what one would hope to gain in doing so is unknown.

Moorla stand 9-10 feet tall and have scaly, humanoid bodies with giant fish heads. They have long arms and long legs that end in webbed hands and feet. They range in color from bright purple to dull brown. Though not particularly violent, they are carnivorous creatures who feed on many of the other organisms which live with them inside their pocket dimension. They are wary of the 'meat strands' that form and dissipate on occassion, always curious what these delicious looking things might be, but frightened as to why they come and go so quickly.

While Moorla appear to be blind, their 'milk-colored, lifeless eyes' are actually capable of seeing across great distances, even in total darkness. They are pretty strong (Strength 17) as well, from their constant swimming, and can move very quickly in water. They are completely useless out of water, having never existed in or experienced anything outside of their own universe. They wield silver poles made from the bones of another monster that inhabits their space. Each pole is dipped in electrified green slime, which discharges on the first successful hit against an opponent. Moorla can spend a round to reapply the slime, if they are carrying any extra with them.

Moorla don't seem to make homes or build shelters, instead roaming in small or large groups. Each group shares the same color scales. They are not known to fight each other, instead choosing to ignore other Moorla they encounter. They also don't typically carry possessions or treasure, outside of their weapons and small sponges soaked in electrified green slime. Their scales can be used to create potions of water breathing. 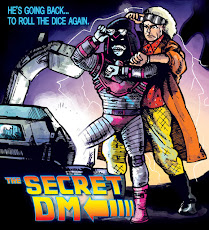